ABOUT OUR TOURS FROM FES

Browse our range of private Morocco tours from Fes, which are available here with GRAND MOROCCO. Fes is located between fertile landscapes and the forests of the Mid Atlas Mountains to the north of the country and is the oldest of Morocco’s Imperial cities. Fes is regarded as a symbol of Morocco’s history and religious capital, a cultural and economic metropolis of ancient times, having been UNESCO listed in 1981.

Fes is north west and not far from the Southern Sahara Desert and is why we include a more extensive range of private luxury and standard Morocco desert camp packages from Fes. There are two desert regions for a desert camp experience, the most popular being the Erg Chebbi region. For a more remote and more adventurous desert trip, the Erg Chigaga is suggested.

Fes is considered a cross-road between other major cities to visit, namely Tangier, the blue city of Chefchaouen, Casablanca, Rabat and Marrakech, which makes Fes a convenient gateway for journeys to all those major Imperial cities. A day tour of Fes will reveal the renowned UNESCO listed walled Medina and an incredible ancient working tannery, an awesome mosaic factory and the world’s largest urban ‘car-free’ pedestrian zones. Fes is affectionately known as “The Mecca of the West” and “The Athens of Africa”. For alternative arrival and departure locations for a Moroccan tour with us, view our range of Morocco private tours departing from Casablanca, Marrakech and from Tangier.

For all our Morocco tours from Fes, we rendezvous with you at either Fes Saïs International airport or at your accommodation. Please Contact us if you have any questions about our range of tours from Fes.

Get inspired with our sample Morocco tours from Fes below. You can have any trip tailor made for your private travel. Any number of days. Any departure date. Any experience you desire.

3 DAYS DESERT TOUR FROM FES TO MARRAKECH VIA SAHARA

Departing Fes, this delightful tour takes you towards the Sahara region over the spectacular Middle Atlas Mountains, where you will observe the majestic Cedar forests housing cheeky Barbary Apes and visit Morocco’s alpine town. Travel through date palm oases through glorious valleys then to the amazing Sahara for a camel trek and an overnight in a Berber starry sky desert camp. Ride Quad bikes in the shimmering dunes of Sahara, visit the famous cinematic city and travel through the UNESCO listed road of the thousand kasbahs, the Rose valley and the iconic mud brick villages. Cross the High Atlas Mountains and witness the production of the world famous Argan Oil on the way to the magic city of Marrakech.. 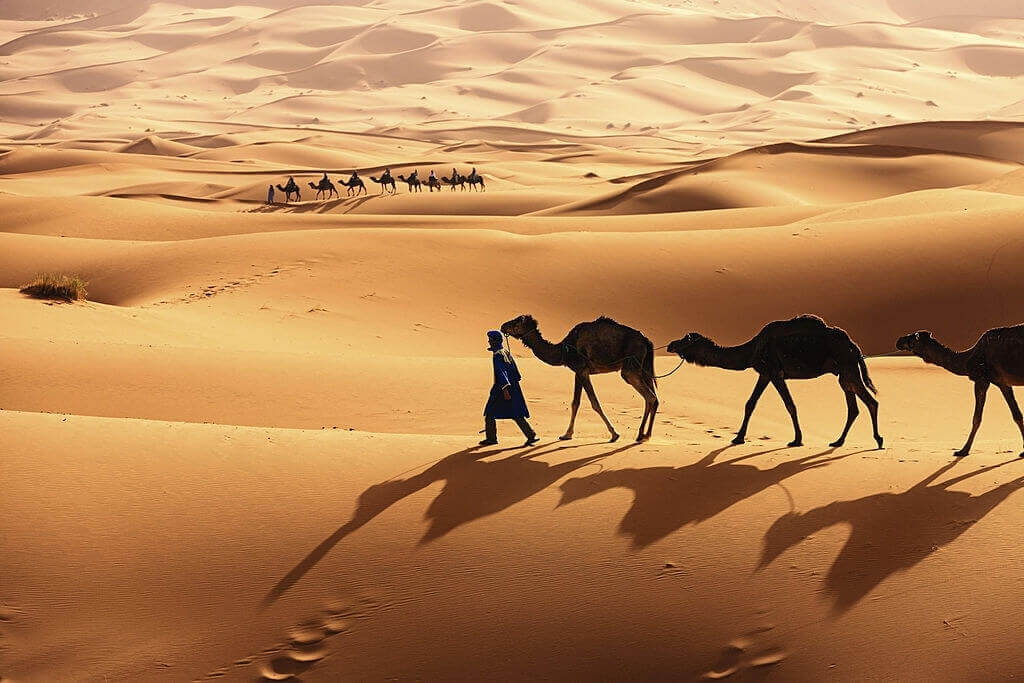 4 DAYS DESERT TOUR FROM FES TO MARRAKECH VIA SAHARA DESERT

This captivating tour will journey over the Middle Atlas Mountains where you will discover the majestic Cedar forests housing the Barbary Apes and stop at Morocco’s alpine town. You will encounter charming oases, awesome valleys, gigantic gorges and amazing rock formations. Experience an incredible overnight in a Berber starry sky desert camp with Sand boarding and Quad bike riding, following the camel trek like no other trek into the Sahara Desert. Visit the capital of fossils, experience legendary African Sahara music and meet a Berber nomad family.

Travel through the UNESCO listed road of the thousand kasbahs, the Rose valley and the iconic mud brick villages. Visit Ksar Ait Benhaddou, one of the most eye-catching filming locations featured in Game of Thrones, Gladiator etc… Cross the High Atlas Mountains and witness the production of the world famous Argan Oil on the way to the magic city of Marrakech..

View This Tour
error: Content is protected !!
Open chat
Need help ?
Powered by
Hello, How can we help you ?